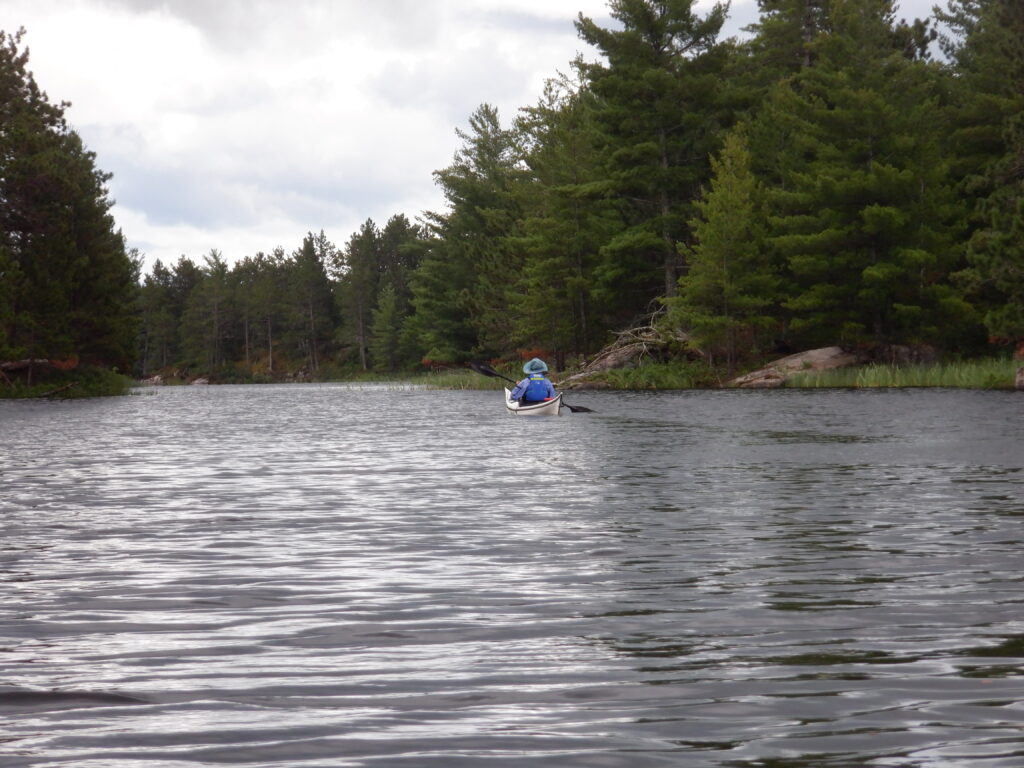 Another glorious long weekend in Voyageurs!

Four ISK paddlers had beautiful weather for our launch from Ash River and seven mile paddle to camp at Torry Fish Camp. Our lunch spot was an open site en route with a dock below the campsite. The dock was fairly high and westerly winds pushed waves into the island, making for an interesting landing and launch with lots of rocking and rolling! I made the dock exit first, tethered my kayak, and then lay down on the dock to brace the other paddler’s boats as they bellied up to the bar—or rather got their bellies onto the docks to pull themselves up and out. The kayaks took some wrangling to get them all secured in the rolling waves while we paused to refuel, and I was glad to be in a drysuit!

After setting up camp, we circumnavigated Kubel Island for roughly another three miles. We were all glad to get out after dinner and enjoy the evening sun on the water. We discovered one of the few private homes grandfathered in to the national park is on Kobel Island, though we never would have noticed if we hadn’t done that paddle.

One of the trails on the island led to some ruins in the woods, possibly from an old fishing bunk house.

On day two, we had stormy weather and camp was soaked! We managed to get out in the afternoon and explore Namakan Island, hand railing the shore and spying across the border into Canada. We put on over six miles, despite the poor weather.

On day three, northwesterly winds blew in at 10-20 mph. The channel in front of camp remained placid all weekend, so we set out for Kettle Falls with a “we’ll see” attitude given the forecast. We had no more than turned the corner and were hit with a serious headwind.

We went to Plan B.

Our day’s paddle took us to two points of interest on Lake Namakan, Stevens Resort and Hoist Bay. Both offered interesting peeks into the past and nice spots to stretch the legs and have a lunch break. We paddled over nine miles that day.

After landing back at Ash River, the ranger at the visitors center told us they had rescued three paddlers on Sunday due to the high winds and one of them had hypothermia. We made the right call!

Day four brought beautiful weather back, so we broke camp and made for home. The return paddle was just as enjoyable as the one out.

“Fancy meeting you here!” We met a group of familiar sea kayakers on the water, heading out to take over Torry Fish Camp. We even left some firewood for them. 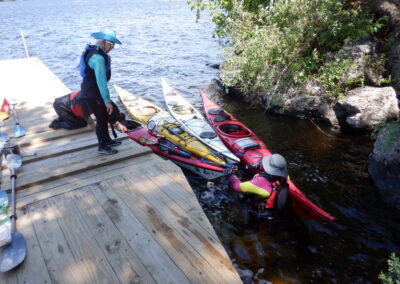 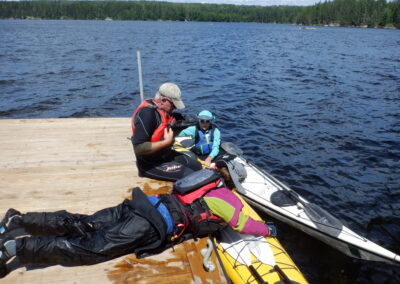 Re-entry from dock with a little help from friends 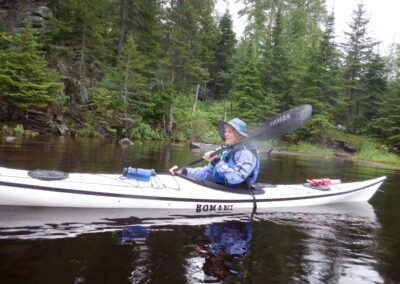 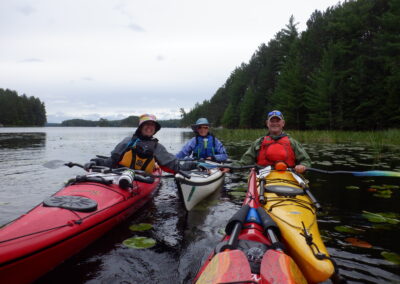 Happy as ducks in rain 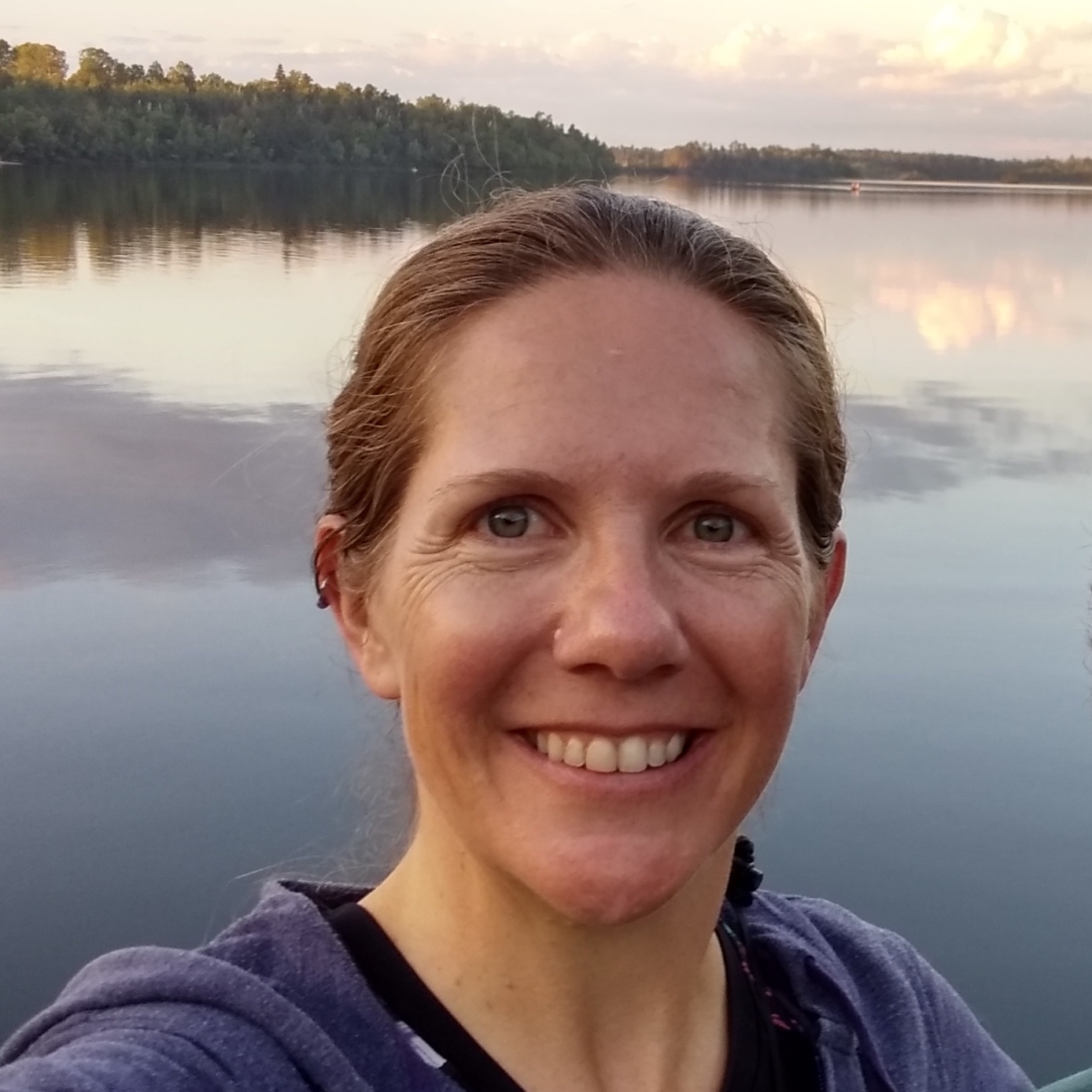 Alida has been paddling with ISK since 2019. She is pleased to say her skills have grown almost as much as her love of sea kayaking in that time. She enjoys leading trips, because she gets to help others explore and enjoy our waterways together.

Eight ISK paddlers enjoyed a glorious few days camping and paddling on Rainy Lake. Canada was right there, over the water, across an invisible line in the waves.Minnesota's Own National Park A motley group of motorists with narrow, long boats strapped to their roofs...
Read More